Sun and fun was in order for the 2015 Rendezvous at Saratoga Springs NY.  With over 275 registered attendees the event has continued to grow with a number of new young faces, along with the regulars that attend each year.   Folks with a common interest in our eclectic French cars gathered to admire them and learn a few new things about how to keep them going.
As has become tradition, the Rendezvous encompassed a full weekend of activities, beginning with a ice cream social on Friday afternoon at Mr. Bill’s Car Hop, 1720 Route 9 South, Glens Falls, a welcome reception at The Springs Motel on Friday evening, the show field and main dinner on Saturday night at Lakefield Farms, and a breakfast and drive to the Saratoga Sprong automobile museum on Sunday.  For those that stayed Sunday night, there was a BBQ dinner hosted by FPS Parts Service West at Furlong’s Family Fun  B-B-Q.

Long time attendees Micheala and Lance Hellman unveiled their 1966 DS Chapron Uisine at Dave Burnham’s stand, having just completed a 4 year restoration at Dave’s shop.  The quality of work was impressive, and Lance and Dave discussed the challenges they faced in recreating the custom bodywork as well as dealing with the typical mechanical issues one faces with working on a 40 year old car that spent the last 30 years in a barn. To mark the 60th anniversary of the DS, and to celebrate the debut of Michaela and Lance’s Carlson’s 1966 Chapron, Henri Chapron’s daughter Noelle came from France to attend.  I had an opportunity to speak with her.  She recalled playing in his shop at an early age when Charles De Gaulle’s custom DS limousine was being built.  (That would be 1968).  One day De Gaulle himself came by for a “fitting”, which may explain in part why the car is so massive. I also asked her what car her father drove on a daily basis in Paris…  Fully expecting her to say a DS or probably even a custom Chapron variant like a Majesty, I was astonished when she casually replied “an Ami 6”.   Flaminio Bertoni, the designer of the DS stated before his death that the Ami was the crowning glory of his automotive design career with Citroën than began with the Traction Avant.  And while the Ami was his last design, and quirky to say the least, the fact that it was embraced by Chapron for his daily transportation needs is a quite an affirmation of Bertoni’s belief.

Noelle also remembers being present in Chapron’s shop in the early 1970’s while the 2 presidential 4-door SM convertibles were being built.  They were first used for the visit of Queen Elizabeth II to France.  She recalls, it was a very special project and there many visits from government officials during that period. 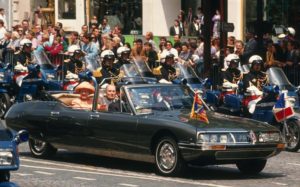 As was the case last year, the Rendezvous show field and Saturday dinner was held at Lakefield farms about 20 minutes Southwest of Saratoga Springs near Balston Spa.  Though numerous Citroëns were on display, no H-Vans or Ami models made an appearance this year.  One novel Citroën that did show up was a C6.  I had an opportunity take it for a drive.   While it certainly is Citroënesque, riding silent and smooth on the hydractive-III suspension, the car just didn’t have the character of a classic Citroen, instead giving the impression you are in an Audi A6 of the same era.  Not a bad thing by any means and most certainly a unique car, but not one I would want own, particularly in light of maintenance considerations here in North America.

The weekend also proved to be fascinating for some of us attending from Canada as we were invited to visit the private car collection of Jim Taylor just outside of Gloversville, NY.  Jim is chairman and CEO of, New York’s Taylor Made Group.  His collection is housed in a 30,000-square-foot building and upon arriving you simply gasp! Inside is a magnificent array of vintage and contemporary cars.  A row of XK-120 and 150 Jaguars, a mint Jaguar SS 100, a full range of Aston Martins. a Mercedes 300SL Roadster, a 1932 Cadillac V12 Phaeton, and a “barn find” 1938 Horsch brought over from Germany 4 years ago, to name a few!  When they were going through the Horsch they found a Luger pistol under the seat, most likely misplaced during the second world war!   Only one French car though and that is a “lowly” Bugatti!

Cars aside, the facility has automotive memorabilia, posters signs and trophies everywhere, and multiple working 1920’s Wurlitzer music players.  It was a privilege to be able to experience it.

Rendezvous continues to be “the Citroen event” in North America though this year Robert Monteleone, who has been the primary organizer for the past 13 years, announced that this would his last year tackling that role.  At an organizing meeting on Fathers Day morning with those interesting in working on the event, it was decided that a committee would be formed and a new group established to ensure that the tradition of Rendezvous continues.   We will provide updates on that as information becomes available.