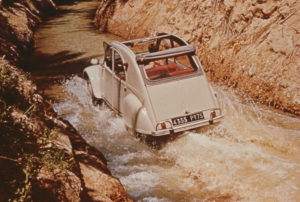 The Citroën 2CV (or “deux chevaux” i.e. “deux chevaux-vapeur [fiscaux]”, literally “two tax horsepower”) is considered one of Citroën’s most iconic cars.  It was designed as an economy vehicle with uncompromisingly utilitarian unconventional looks.  Conceived in 1936, the 2CV was built in prototype form before WWII.  Although 250 of these prototypes were built prior to the 1939 Paris Auto Show, the war intervened and all but four of them were scrapped to avoid having them fall in German hands. 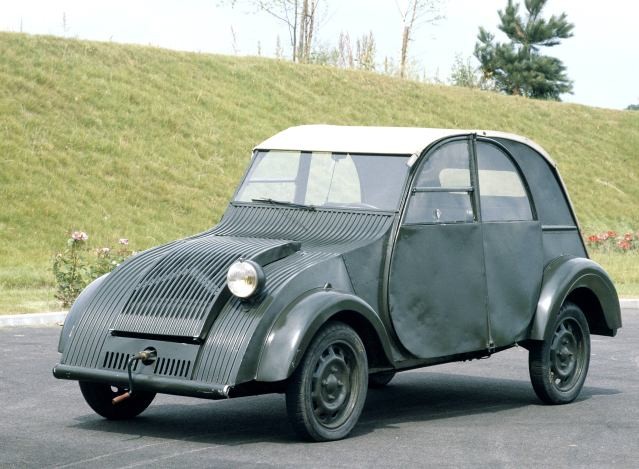 The 2CV was eventually introduced in 1947 and reached production in 1949 although only 924 were built that year.  Since then, some seven million 2CVs and 2CV variations have been produced with production ending in 1990.

The first 2CVs, designated ‘A’ series, had a 375cc 2 cylinder engine and were rated at two horsepower on the French fiscal rating (hence its name 2CV or ‘two horses’). It had such features as a canvas roof, running from the windshield to the rear bumper (forming the trunklid as well as the roof) and just two instruments: a speedometer and an ammeter. It was available in only one color, an aluminum grey.  Over the years. the 2CV slowly evolved to its present-day form. In 1954 it got the 425cc 12 hp engine, in 1957 the metal trunk lid, in 1959 it offered a wider range of body colors, and received a third side window in 1965.  Early models featured a “ripple bonnet” hood (up until 1961) and reverse opening front doors (until 1963).  Power increased over the years to 425 cc 12hp, then 435 cc 18hp and finally a 602 cc version that delivered a whopping 29hp! 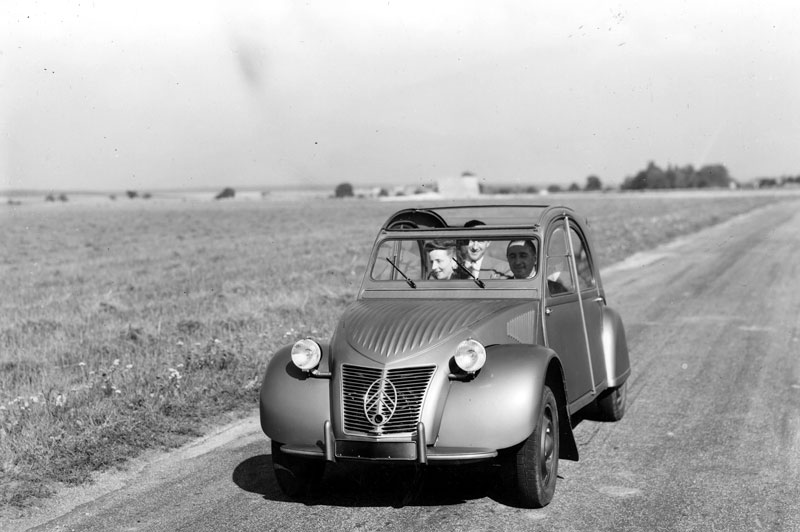 The 2CV was technologically advanced and innovative, with engineering such as front-wheel-drive and a front-to-rear compressed spring interconnected suspension system that gave it an incredible “floating” ride. Commencing in  the 1970’s Citroën offered decorative models of various themes.  Ten special editions that were launched in France and other European countries:

The best known of these special edition models is the 2CV Charleston.  Citroën produced 8,000 of them in 1980 with burgundy and black body paint (and swooping decals applied to the doors), special diamond-patterned grey seat upholstery and retaining the iconic round headlights from the 2CV Spécial model at the time.  Though Charlestons were initially released with a burgundy and black finish, by July 1982 Citroën added a yellow and black variant.  By July 1983, the yellow and black Charleston was replaced with a version that had two shades of grey.

The very last 2CV rolled off the production line on July 27, 1990 at precisely 4 pm not in Levallois, France, where production had ended in 1988 but in Mangualde, Portugal, where the 2CV line continued to produce cars until that day.  The Mangualde models are easily identifiable by their windows as they sport the name of their Spanish glazier, “Covina.” Since its debut in 1948, a total of 5,114,959 2CVs were produced worldwide and the last car built resides with an enthusiast in the Alsace region of France. 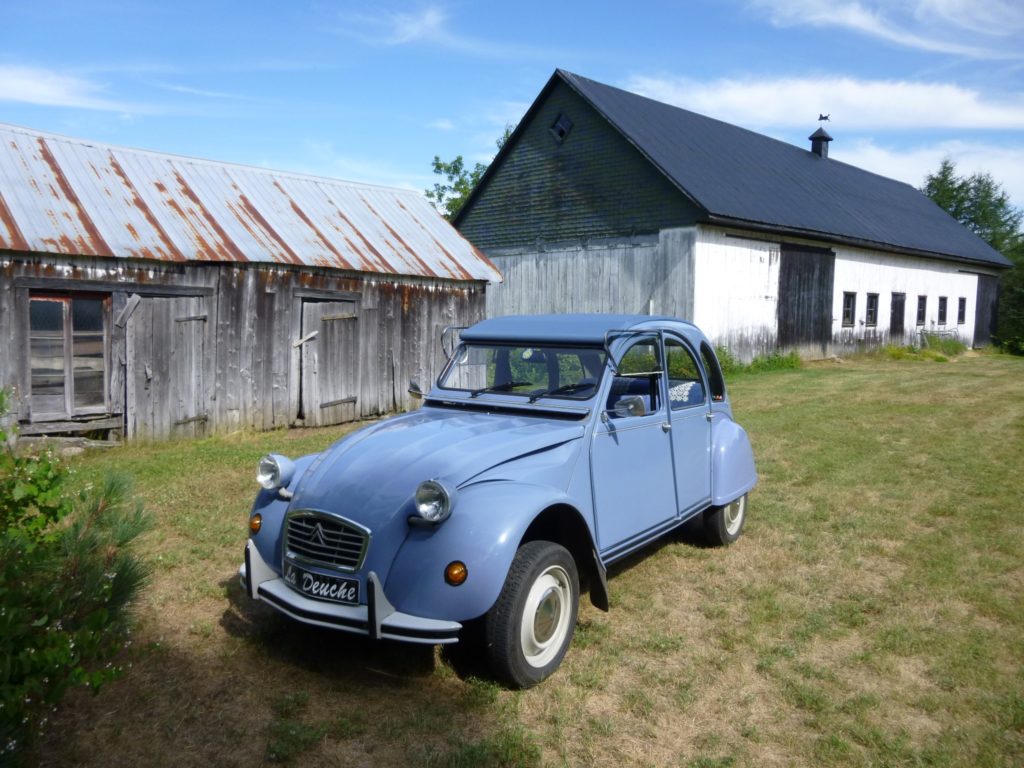 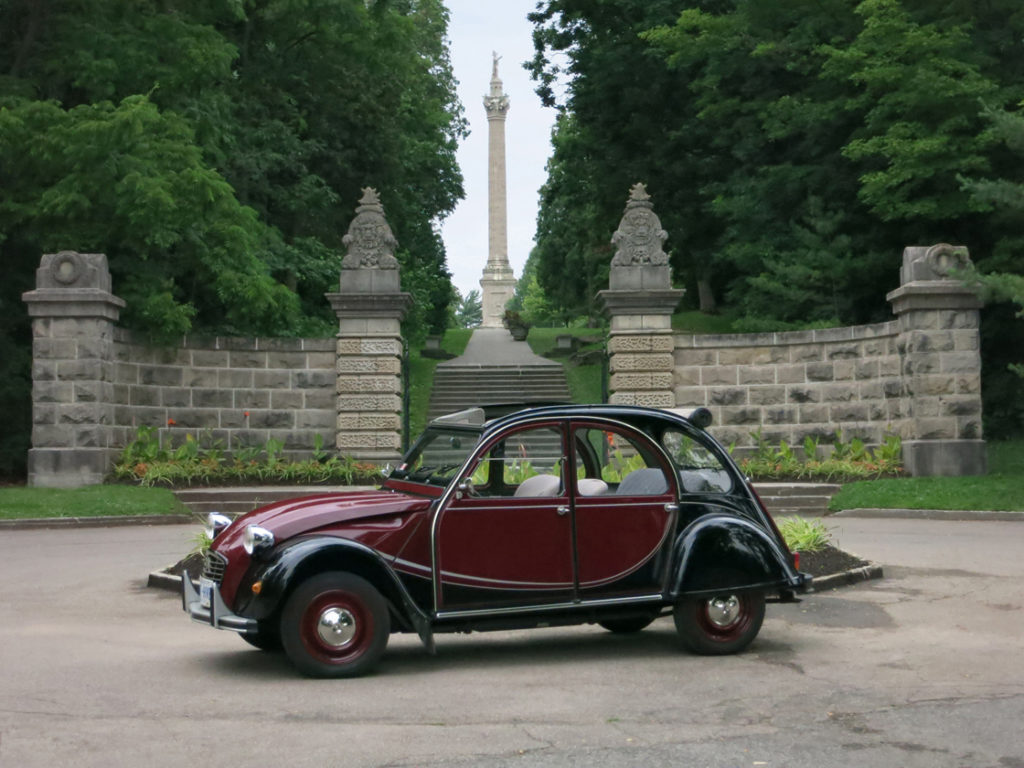 Truckette versions of the 2CV were also produced as was a 4-wheel drive model called the Sahara with 2 engines; – one in the front and one in the rear. There was also a plastic bodied model known as the Méhari.  (We have a separate gallery for it.) The Citroën Dyane, based on the 2CV’s suspension and mechanicals, was introduced in to be an upscale economy car.  (We have a separate gallery for it.) The Citroën Bijou was a small fiberglass bodied couple also based on 2CV’s suspension and mechanicals that was manufactured in Citroen’s plant at Slough in England.  (We have a separate gallery for it.) Here is a timeline of the 2CV and its main 2CV derivatives:

• October 7, 1948 – Presentation of the 2CV at the Paris Motor Show.
The revolutionary 2CV was presented to the French president Vincent Auriol and the public.  It was produced until July 28, 1990.  More than 5 million 2CV’s have been produced in several body variances.
• October 1950 – 2CV Van at Paris Motor Show.
The 2CV was a huge success and by 1950 new customers had to wait up to six years for their 2CV to be delivered!  During the motor show, Citroën launched the 2CV Van. This Van has a 375cc boxer engine with a top speed of around 60 km/h. It could travel 100 kilometers using only 5 litres of fuel. The load capacity was 250kg.
• March 1951 – Production of the 2CV Van
The Van remained in production until March 1978.  In total, 1.2 million Vans were produced.
• 1959 – The Citroën Bijou commenced production.
Production ceased in 1964 with just 207 produced.
• April 24, 1961 – Introduction of the Ami 6
The Ami 6 was a re-bodied 2CV to cater to the traditional sedan market.  It had very distinctive body lines and a larger engine (602 cc) than the 1950s 2CV, to compensate for the added body weight.  The Ami 6 also featured a distinctive reverse-raked notchback rear window.  (The Ami was offered in sedan and break (estate) body styles over two generations; the Ami 6 and the Ami 8.  And the Ami Super was powered by the 4-cylinder engine of the GS and produced between 1973 and 1976).
• July 1967 – The first Citroën Dyane was being produced.
The Dyane was technically based on the 2CV but with an entirely new body. It was positioned between the 2CV and the Ami 6  and had all advantages of a station wagon with its foldable rear seats and a hatchback.
• May 1968 – Citroën Méhari
A year after the Dyane, the first Méhari was being produced.  A versatile off-road vehicle with a rust-free body made of ABS plastic.
• March 1978 – Citroën Acadiane launch
The Acadiane was the successor of the 2CV Van.  It was a compact utility van based on the Citroen Dyane.