For the past 5 years we have been conducting an experiment in Toronto on a 1960 ID19 running what seems to be an LHS compatible hydraulic fluid.  The car has been a test project where we have used synthetic hydraulic fluid in place of LHS.  We wanted to use a modern easily obtainable fluid that does not absorb moisture (like LHM), does not destroy the original LHS seals, O-rings and suspension diaphragms and has the viscosity of LHS to retain the legendary “red fluid” like ride of early D models.

First a primer:
Early DS models used a “LHS” suspension fluid which gives a noticeably softer ride than the versions produced from 1967 onward that use “LHM” fluid.  The LHS fluid (referred to as red fluid by its colour) was hygroscopic, like most brake fluids, and absorbed moisture causing lines to corrode internally.   LHM (green fluid) solved that problem being mineral based, but is not as viscous so the suspension of later model cars do not have the same compliancy.  That’s why people say early D models give the ‘true ride of a Citroën’.  You cannot mix LHS or LHM fluids or put LHM in LHS cars, or vice versa.  Doing so will ruin the all the suspension seals, pump, accumulator etc in the car.

ID models use the same hydropneumatic suspension as the DS.  The ID was introduced two years after the DS and was designed to be a little less luxurious and simpler mechanically, therefore easier to maintain.  It has a manual 4 speed gearbox instead of the semi-auto of the DS.  And it does not have the power steering as in the DS.

The Solution:
It came about by accident.  The ID19 had been worked on for a major leak that occurred when a pipe to the main accumulator had  dislodged and the car lost a substantial amount of LHS.  At the time of the fix the decision was made to flush the entire system and install fresh fluid.  In ordering in what we thought was LHS compatible brake fluid we where shipped Pentosin CHF 11s and it got poured into the ID.  It was only after the fluid was in the car that the observation was made, looking at one of the cans, that the fluid was a modern hydraulic fluid.  Further referencing to the recommended fluid chart compiled by Tony Jackson and Mark L. Bardenwerper, Sr. at http://citroen.cappyfabrics.com/tony.html indicated that the fluid in the car was actually LHM compatible but not LHS!

Now the question was what to do?  The ID19 seemed to be working, but for how long?   The Pentozin website states it is: “A synthetic high performance hydraulic fluid for life-time application in modern vehicle aggregates. Pentosin CHF 11S is especially designed for hydraulics in the automotive industry with the highest technical requirements such as in: power steering, level control, shock absorber, hydro-pneumatic suspension, stability and traction control, hydraulics for convertible tops, central lock systems, etc.  It is suitable for all extreme conditions and guarantees full performance from -40°C to over 130°C system temperature.”

We wondered if CHF 11S would be compatible as a red fluid like LHS and if putting it into the ID19 in place of LHS would incur any damage to the hydraulic or braking system?

Since the fluid was in the car, what damage was already done?  We decided that rather than undergoing the time consuming process of replacing all the LHS seals, O-rings and suspension diaphragms, or installing LHM ones for the CHF 11S, we would leave it as is and wait to see just how long the ID would operate with presumably incorrect LHM compatible fluid. It would now become a rolling test bed for CHF 11S.

We wanted to incur 5 years of testing to ensure there were no issues before reporting our findings, particularly in light of it going against what is stated in published documents about what fluid to use in D models.  We are happy to report that it has proven to deliver the best of both worlds; LHM like reliability and a LHS like ride. 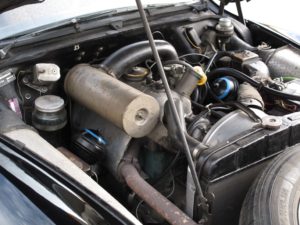 Is it a solution?
As part of partial restoration this past fall, (floor panels and interior), we looked inside the ID’s suspension seals, the hydraulic pump, the suspension sphere diaphragms etc to see of there was any deterioration using such fluid.  They were all in perfect shape!  Quite a breakthrough for what used to be a problem with a LHS type fluid in car like this.

Disclaimer: We are not saying that everyone should be putting Pentosin CHF 11s in their red fluid D models, or changing brake fluid to use it.  You do this at your own peril, – and your mileage may vary!   However we felt we should report our findings so at least you aware of our experiment and our success so far.