We sorrowfully announce the passing of Ken Smith, a key figure in Citroën’s UK production from the end of WWII to 1988.

From May 1946 Ken worked at the Slough Production Methods Department and this meant he always had a great deal of contact with Paris regarding adapting production methods from the large numbers built in Paris to the much lower volumes envisaged at Slough.  When the DS was being developed, Ken was involved at an early stage and he had to discover everything about the DS in all its details; to assess and acquire compliance with all the British Road Traffic Acts, Construction and Use Regulations, Vehicle Lighting Regulations and all other relevant Acts and Orders; to assess the changes necessary in order to assemble, trim and paint the vehicles at Slough.  This was a vehicle which was totally different from the Light Fifteen, Big Fifteen and Six Cylinder.  At short notice he had to become familiar with all the components, units, assemblies and items in the car and to learn how they functioned, in particular the hydropneumatic suspension, the hydraulically operated clutch and gearchange, brakes and steering and to prepare a summary of components and materials for local purchase before production in the UK could commence.  From 1954, he spent almost half his time at the Bureau d’Etudes in Paris until shortly before the launch of the DS at the 1955 salon. This meant he got to see all sorts of ‘top secret’ studies. 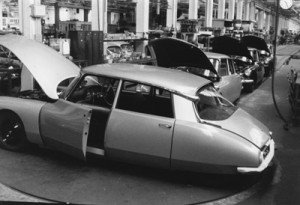 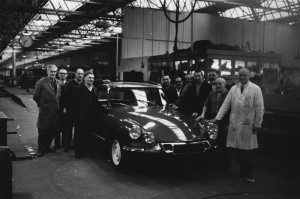 Ken was given the job of producing the right hand drive SM.  This was on top of all his other responsibilities and he did not have enough time so the work was undertaken by Middleton Motors under his guidance.  When Citroën bought Maserati, he was sent to Italy to liaise with the Maserati people and even went to evening classes to learn Italian…

Ken was born in 1923 and was brought up in London where his mother was a teacher of English and Music and his father was a headmaster. It was naturally assumed that he would follow in his parents’ footsteps but he had absolutely no desire to become a teacher and anyway, the war intervened.

During the war, Ken’s school was evacuated to Slough in Buckinghamshire where he was a member of the School Unit of the Air Defence Training Corps (later renamed the Air Training Corps).  He left school at the end of 1941 and applied to join the RAF but his need to wear glasses ruled out aircrew and while the RAF dragged their heels the Ministry of Labour put him through training as an Instrument Maker and as an Engineering Draughtsman.  Then, in September 1942, the Ministry of Labour offered him the choice of a job in Newcastle upon Tyne or the somewhat more local Slough.  He opted for the job in Slough at Citroën Cars Ltd.’s factory on the Trading Estate.  This was a reserved occupation which meant he would not be conscripted.  Since the production of cars had ended, the company made components for the war effort and also assembled 23,480 Ford and GM military trucks for the Canadian army.

He also joined the National Fire Service as a part-time despatch rider and cartographer of water supplies, working in the evenings, weekends and holidays.

After the war and once car production resumed, he created the first Citroën Cars Ltd. Technical Training Centre from scratch and was Chief Instructor providing training to dealers.  He was also responsible for ensuring that the British-built cars conformed to the various Acts and Orders relating to the manufacture of cars at Slough and also for obtaining National Type Approval for vehicles imported from 1977.

In December 1946, he married Agnes Louise (known as Nancy) who predeceased him in March 2010.

Richard Bonfond (whose father, Albert ran the West Coast American Citroën Car Corporation) worked for Citroën for several years in the early seventies including some time at Citroën Cars Limited in Slough where he dealt with Ken on a regular basis. He said, “Not only did I learn to respect him for his knowledge of the make but he was an absolute jewel of a man, whose office door was always open. Never did I see him lose his temper or raise his voice no matter the situation. He was a true gentleman who will be missed.”

Ken retired from Citroën in August 1988.

He is survived by a daughter, Kathleen and a son, Leslie.

Also we recommend reading this 2011 interview where Julian Marsh spoke with Ken:
https://www.citroenet.org.uk/foreign/slough/ken-smith/ks1.html